This is the kind of sports story that transcends clichés.

Surfing’s most prestigious and insane competition — named after a legendary Hawaiian lifeguard — is getting an auspicious champion: a little-known surfer who competed during breaks from his own lifeguard job on Oahu.

Luke Shepardson, 27, claimed one of surfing’s highest honors on Saturday by winning the Eddie Aikau Big Wave Invitational. He has defeated many of the sport’s most iconic athletes, including 2016 defending champion John John Florence.

This was the last year this race was held, in part because it is only held when the waves at Oahu’s Waimea Bay reach over 40 feet—a rare occurrence.

This year’s competition invited 40 surfers, including professional athletes and local legends, to ride waves over 15 meters. Around 60,000 spectators watched surfing’s most iconic event from the beach and nearby cliffs.

Even before Shepardson was announced as the winner, commentators at the event noted the young gun’s stellar performance and commitment.

The surfer started the day by asking his boss for one-hour breaks to compete in the invitational, known simply as “Eddie” among surfers.

“Talk about an inspirational story,” said one commenter on the contest video below. “No rest for Luke Shepardson. You’re either rescuing people or powering Waimea.

“Off the Charts” performance by Shepardson

Even the biggest fans of surfing admitted that this year’s Eddie Aikau event was something special.

This marked the 10th running of the competition, which began its rise to international prominence in 1985.

“It’s gone to some other immortal level,” Surfline wrote. “And magically enough, an event honoring the most famous lifesaver in surfing history was won by a young bay lifesaver… In a brilliant second round, [Shepardson] decisively broke off a tight race with John John Florence, Mark Healy and Billy Kemper to beat Eddie in his first year.’

Commentators at the event also noted Shepardson’s breathtaking performance at the start: “the waves, the lines, the commitment – off the charts.”

He finished the competition with a near-perfect score of 89 (out of a possible 90). When the results arrived, Shepardson found himself hoisted on the shoulders of fans while still wearing his uniform: red shorts and a yellow life jacket.

Eddie Aikau: More than a surfer

For surfers and spectators, The Eddie is more than just a big wave competition. This is a cultural event commemorating the life of Aikau, the surfer from Oahu who became the North Shore’s first lifeguard.

He saved more than 500 lives in his career, riding dangerous waves that no one else could handle. For this reason, each competitor’s jersey featured the event’s catchphrase: “Eddie Would Go.” 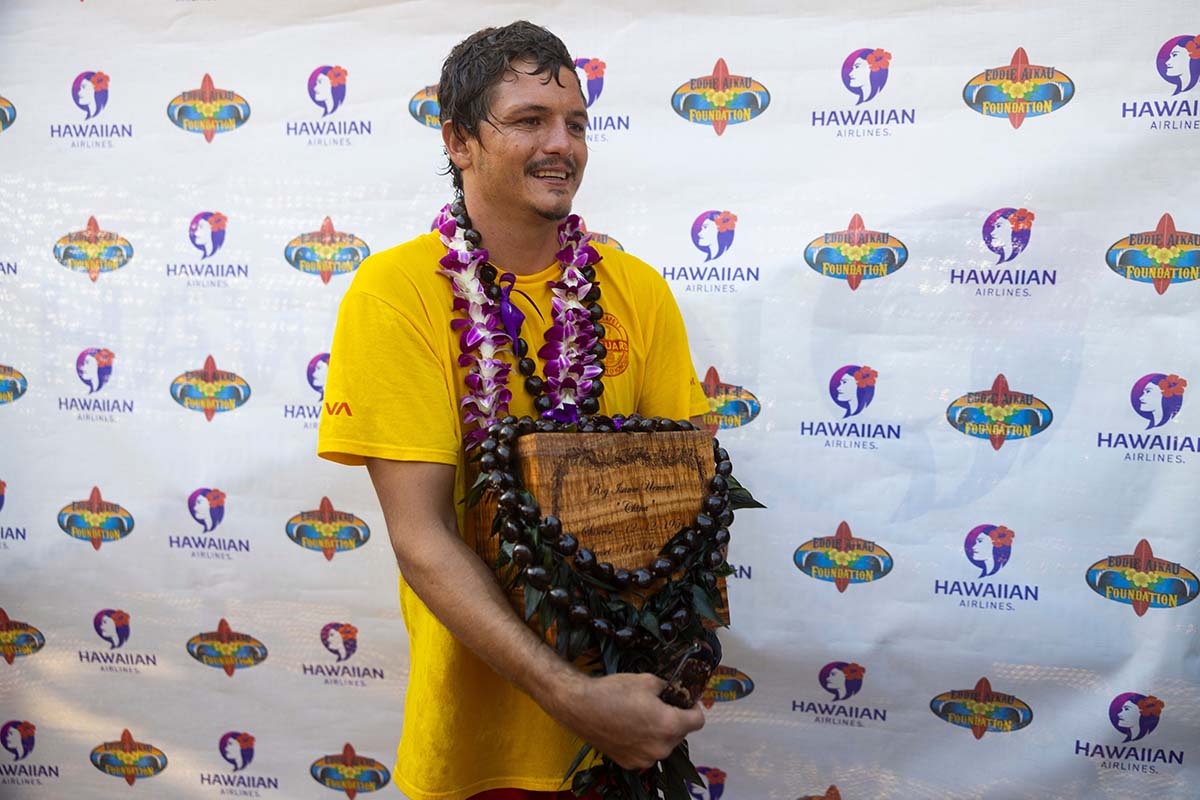 Luke Shepardson poses for photos before returning to his job as a lifeguard. Photo: Shutterstock

Aikau died in 1978 as part of a canoe trip trying to trace the ancient Polynesian migration route between Hawaii and Tahiti.

For Shepardson’s part, he briefly celebrated his victory, then returned to the duty that made Aikau as beloved as he was famous.